Thanks for being here! Our family got to spend the week of Thanksgiving break traveling in Tuscany. Well, that was the plan. Join us on our journey, and get a taste of traveling Gates’ style. Our favorite companions are our kids, maybe because they share out quirky sense of adventure, peculiar (semi-vegetarian) eating habits, drink minimally, and have a great time driving and walking. The world is so big and there is so little time to explore! Here is my journal for the trip!

Day 1 (Sunday) In  Which the Gates Family Unexpectedly Travel More Countries Than Planned.

If you travel often enough, complications will eventually happen. As happened the last time we flew to Europe, our flight from Chicago was delayed because of mechanical issues. I figure it’s better to find the problems while still on the ground, so I won’t complain too much. It just makes for very long days. 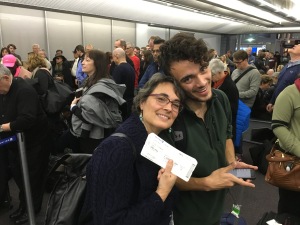 We (My husband, oldest son and his wife, and two younger sons, plus myself!) arrived for our layover in Frankfurt, Germany an hour after our connecting flight to Bologna, Italy took off. They kindly directed us to another counter where we would be rebooked on whichever happened to be the next available flight. The line was already over a hundred people long. Two harried looking agents were slowly working their way through the mass of fatigued and none too happy travelers. After already spending an undesired amount of time at O’Hare,  our hearts sunk at the thought of spending more of our precious, scant vacation hours at another airport.

“Missed flights and long lines will NOT spoil our vacation.” New logo for the day.

Doug turned to the rest of us with a grin typical of his “I have something up my sleeve” moments. My husband is never boring.

“Let’s drive.” He said, then took off in the direction marked as ‘baggage claim’ and on through customs. We, oh wise travelers that we are, had only carry-ons, so were free to keep going. Then on to the Avis counter to see what mode of transportation could get.

The remaining five of us followed our fearless leader exclaiming, “Woo-hoo! Germany, Switzerland AND Italy! Jackpot!”

In our defense, none of us was completely awake at that point. Still, spontaneity by nature has its advantages, and we have learned that often the unplanned excursions hold the best memories.

We acquired a nine passenger Mercedes van. If that brings to mind luxury like Mercedes at home, think again. This thing was basic, bulky, and not the most comfortable. It was spacious however, and from Italy so we could avoid the one-way drop off fees. (I wonder why I can’t get a van back home with three seats in front, three middle, three back. Really, with increasing numbers of grandchildren, that is a consideration!)

I haven’t been to Germany since life BC (Before Children) and then we traveled by train. The Autobahn is quite the experience. Beautiful wide lanes, no speed limit. It’s a testosterone dreamland. Doug had to accelerate to 100 mph just to say he’d done it, and while most drivers cruise at a reasonable 85 mph or so, others passed us by as though we were jogging. We did pass one accident close to the Swiss border. Someone ran into the median. Not sure anyone walked away from that one. Maybe they did, seeing as all other vehicles managed to avoid hitting them. 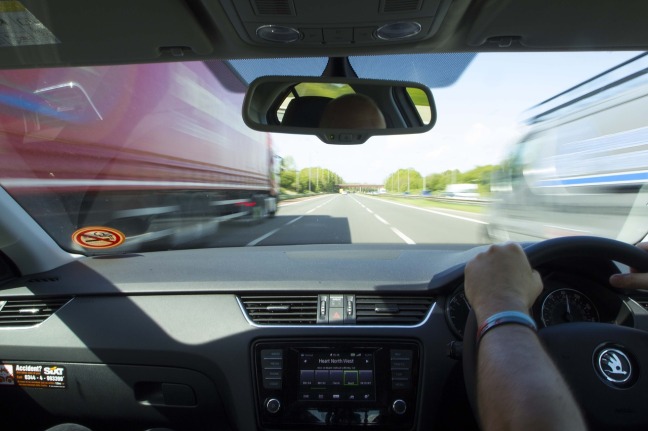 I don’t know if Germany restricts what time of day trucks are allowed on the road, or if they don’t drive as much on Sunday. Does anyone else know? We noticed most transport trucks were parked in rest areas. It was well into afternoon before a few appeared on the road. This suits me fine. I am generally laid back, but trucks and I don’t get along. I’m convinced they are out to get me.

The terrain was different from what I remembered. Flatter, with lots of greenhouses. Black forests flanked the road where fields did not. Dark bark and falling leaves the perfect inspiration for tales of children lost in the woods chancing on gingerbread houses, with wolves and witches hiding in the shadows.

Gradually the flat land was replaced by hills. Not quite the rolling hills of home, but larger “I’m trying to be a mountain” ones that will forever live as ‘slight’ considering they reside in the shadow of the alps.

Border crossing into Switzerland was also a di 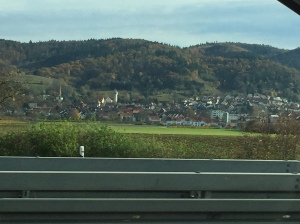 fferent experience from last time we passed this way. The border police simply nodded and waved us on. No passport stamp. Sigh.

Then we headed through a tunnel, emerging on the other side with a gasp. From one side to the other the scenery transformed from normal every day, to the grandeur of snow-peaked Alpine mountains rising above deep valleys. Picturesque villages clung to the rising slopes and tall steeples rose above the villages. Sheep grazed the lush grass kept green by numerous waterfalls gushing over rock faces and plummeting down the mountain. 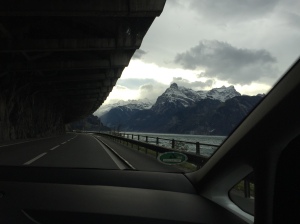 Can you tell I was impressed?

Lunch in Basel, right on the Rhine River. Crooked streets lined with historic and modern structures were navigated by trolleys and automobiles. Parking was three stories underground, and it being Sunday, everything was closed. We strolled the banks of the Rhine then sought in vain to find an appropriate restaurant. By appropriate I mean affordable. Switzerland is expensive!

I have a rule while traveling abroad: avoid American eateries. Part of learning about another culture involves native cuisine. All rules have their exception. Subway was open. We ate. We moved on until after dark. Considering sunset is around 4:30, that doesn’t say much. No way we were going to make it all the way to Italy tonight. When fatigue came calling, we opted to spend the night in Lucerne, Switzerland.

Remember what I said about if you travel enough. Complications are bound to occur?

Note to self: Gasoline in Diesel engine=bad. 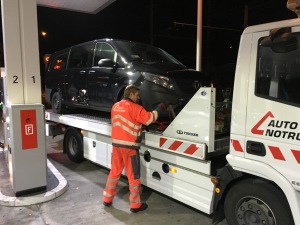 Second note to self: Just because diesel in my mother land is marked with a green handle doesn’t mean other countries mark theirs in a similar manner.

Third note to self: be extra cautious making online hotel reservations when suffering from jet lag.

Hot showers. Yes! We really needed that if we wanted to stay enjoying each other’s company. We laughed a bit watching Homer Simpson speak German on TV, shows how tired we were since only Doug understood what was being said and you can’t lip read cartoons. I have no idea if the beds were comfortable. We slept like a ton of bricks.

Check back tomorrow for Day 2!