Day 3 (Tuesday) In Which The Gates Family Tours Pisa, The Mediterranean Coast, and Lucca

Since most of the party slept during the drive, we opted for a somewhat early morning. Couldn’t be too early, this is Italy, after all. The desk clerk informed us that few things open before 9:30. We met for breakfast at the hotel at 7:30, in the hotel restaurant. The dining area meets the same high standards of the hotel lobby with marble pillars, white tablecloths, and personable staff.

A standard continental breakfast includes breads and cereals, eggs, cheese, meats, fruit, coffee and tea. Here we also enjoyed fresh fruit, tomatoes, and a huge variety of pastries, along with fresh squeezed blood red orange juice. All of this included in the hotel price.

Technology makes travel so much easier. Having checked the weather forecast for the region we discovered rain moving in, but still clear today in Pisa. So, Pisa it is!

We drove through resplendent Tuscan hills, living up to their reputation at every turn. (After the alps it is difficult to call them mountains.) I notice a big difference in the homes here versus the ones in Switzerland. In Switzerland the shingle roofed homes were nestled into protective valleys, with sloping rooftops that effectively evade snow accumulation. They were large enough to house several families, their livestock, and all the fuel and feed necessary for the winter. Not saying that is what they do, just that it would suffice for that. Tuscany is full of villas, standing proudly on the highest peaks available. They are predominantly built of stucco or stones, with tile roofs capping multiple storied structures. The top floor is frequently open to the air and home to flowers and a fabulous view.

The pines of Italy are unique. Tall spires of green cypress interspersed with puffy topped umbrella pines trimmed of all lower branches to create a canopy that shades from the bright summer sun.

Hillsides are dotted with ruins. Ancient towers and remnants of castles challenge my American sense of “antique.” Why didn’t our forefathers build with rock? It lasts so much longer than log cabins. For the Italian, the two-hundred-year-old structure is the house next door, not something to be added to the historical society.

I took an insane number of pictures out the car window, only to delete most of them. Nothing but the human eye or a super expensive camera can do justice to the sights. Besides, I ran out of memory on my phone before the day was over. Doug patiently endured my childish exhilaration of, “Oh! Look how sweet!” at every curve. The kids (Sorry, grown offspring. You will always be ‘the kids.’) seemed equally impressed.

Pisa. There is a reason it is crowded with tourists most of the year. Not climbing the leaning tower would be akin to a sin (unless you have already done it, then you might be forgiven.) The experience is one of a kind. 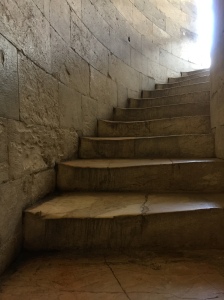 The well-worn stone steps curve along the inside of the outer wall, with only intermittent glimpses of the outside. This fools the eyes into thinking you are walking a normal staircase and startles the senses with the pull first toward the right then the left. When on the side slanting down you step with remarkable ease. When on the upward spiral, feet become leaden and breathing challenged. Perhaps Galileo dropping various sizes of balls from the top was more of a statement of “No way I’m carrying these back down” than anything else 😉 The view from the top, while disturbed by necessary fencing for safety’s sake, embraces the whole city. Its buildings, built to fit into wherever space allowed, are dominated by the Romanesque Cathedral of the Assumption of Mary. 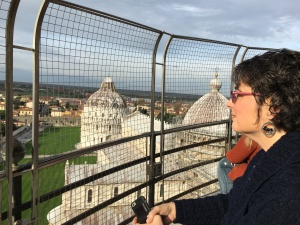 I often wish that by laying hands on ancient pillars I could see what those walls have seen. This is the church where a young Galileo, somewhat distracted during a service, watched monks pull the lamp up to the balcony, light the candles, then lower it back into place. As the lamp swung back and forth like a pendulum, Galileo timed the swings with the beats of his heart and discovered that it took the same amount of time for the lamp to swing the large arc as to swing the smaller one as it slowed to its eventual stop.

The lamp has been replaced with a modern replica complete with electric bulbs. It still manages to maintain much of the original ambiance. The grandeur of the surroundings with medieval art and high arches inspire awe and lift the soul to Heaven, just as it was designed to do. Mosaic floors beneath the benches remind me of a time when workers labored to produce art that would transcend time. It is glorious and they succeeded in their desire to honor the creator of all things. Every detail stirs the heart to worship.

(for a bit of history and some more pictures see https://en.m.wikipedia.org/wiki/Pisa_cathedral)

The baptistery is a rotund marble building, a mix of Romanesque and Gothic design, simple yet classically awesome, with pillars leading the eye up to the dome. On the hour, a man entered and sang out simple chords, demonstrating the rare acoustics within. Each note, in his clear tenor voice, clung to the next, forming a chord that resonated throughout. It was all we could do to not sing along.

The crowds were few, it being off season. Still the tourists on the lawn did the usual photographic trickery of holding up the tower or pushing it over. My second son, per his usual, had to be different and had to “hold up” the wrong end. 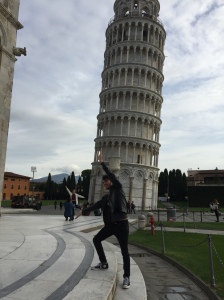 His father, not to be left out, had to hold up a completely different structure. Like father, like son. 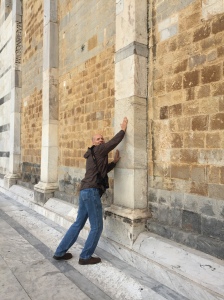 The Camposanto Vechio, is a walled in cemetery said to have been built around a boatload of soil dug up from Cavalry in Jerusalem. This large, Gothic, rectangular structure has covered cloisters running the perimeter. The half wall and elaborate arched windows (without glass, so what would that be called?) open to the courtyard at the center of the rectangle. Monuments, some with amazingly lifelike sculptures, catch the eye. Frescoes decorate the inner walls. Under the rock-tiled floor are many tombs, mostly wealthy patrons or higher church officials.

After touring the tower, church, baptistery, and cemetery, we walked through the city to the river’s edge. It rivals the riverfront in Florence. We also grabbed a meal at one of the local restaurants. We forgot our bread in the car, so decided to enjoy a big lunch and light supper today. Most of us had spaghetti. My mouth waters just to recollect it. Two of the least adventurous diners among had hamburgers. (What a sacrilege.) While dining in the outdoor patio might feel perfectly European, there was a good reason why none of the locals were eating outside. We were perfectly warm while walking about, but while we were sedentary, the chill of fall made its presence known. Next time, we will look for either indoor seating, or seek a place with the plastic patio shelters to block the wind.

Shops along the way are filled with sculptures and fine art, as well as typical cheap plastic leaning towers.

We decided to catch the sunset on the coast since we were so close. I gazed out at the Mediterranean and marveled that this was the center for so much of history. Just north along this coast is Genova, home of Christopher Columbus. He must have known these waters well. The water is rough, splashing up on the rocks lining the elevated walkway we strolled along.

Palm trees are plentiful, with parks perfect for family pictures. 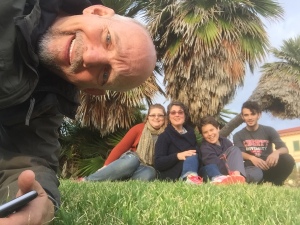 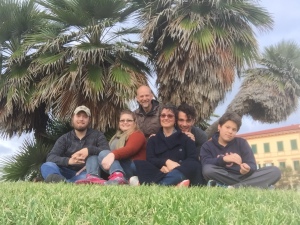 Driving to our home base of Montecatini, we decided to stop at the city of Lucca (http://www.italyguides.it/en/tuscany/lucca) Undamaged, intact roman and medieval walls enclose this sleepy little city, often missed by most tourists. Home to Puccini, it is said to have been a favorite of Napoleon and given as a gift to his sister. This quaint city has protected its interior from the modernization frenzy and maintains a delightful atmosphere. Quite medieval sans the filth and odors. If I retire in Italy, I think it will be here.

The top of the wall is wide enough to hold a paved area for bikers, joggers, and casual walkers amid trees and gardens along the way. Taking a picture from on top of the wall, it was hard to tell that we were not on ground level.

If we had arrived earlier in the day, we could have rented bicycles and toured the whole perimeter. Inside the city center, streets, homes and churches hold to a time long past. We strolled the narrow and crooked roads, eventually stopping at a café where we enjoyed some fresh pastry, coffees and teas while watching the local night life pass us by. 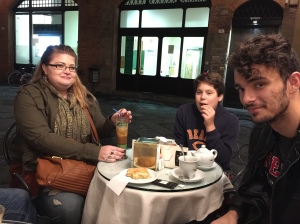 Unlike at home, the coffee here is served in small, yet strong portions. Tonight I asked for coffee with cream. The cream was sweet and thick as butter. Made for a delicious but calorie laden drink.

According to my faithful Fitbit, I completed my ten thousand steps by mid-day. After this coffee, I better do as much if not more tomorrow.

At the hotel, we discover the airline we are supposed to take from Bologna to Frankfurt on our way home is going on strike. Unless we want to be stranded (not a bad idea, if you ask me) I guess we’ll have to keep an eye on this.

It has been an amazing day. Thanks for joining us. Come again tomorrow for day 4!