Day 5 (Thursday and Thanksgiving Day) In Which the Gates Family Avoids the Rain to Explore a City Above the Clouds.

There is rain in the western coast and throughout the Tuscan region today, so we decide to drive several hours south-east to see a favored city of pilgrims—Assisi.

While we are not pilgrims, we love history. Once again the drive is full of the dilapidated remains left to us by history. I long to know the story behind each crumbling castle, the battles fought on once mighty fortresses. There are no signs alerting passersby to who lived here when, no protective barriers keeping curious travelers off the ivy covered ruins. They are so commonplace children play in their shadows and sheep graze in their hollows.

As we descend from one mountain path and into a valley, Assisi looms ahead on another mountain range. The perfect fortress city on a hill, with walls inside walls, inside walls, terracing the mountainside. We take the road as it switchbacks up the hillside to our

destination, rising quickly and majestically above the valley floor. We park beside a large structure from which emanates cheerful chatter of many children. It’s the local school, I’m sure. Then we enter through San Matteo’s Gate.

Inside the city the streets are short and narrow, connected with stairs ascending and descending crazily with a rhyme and reason long forgotten. Planters filled with begonias line tiny patios. 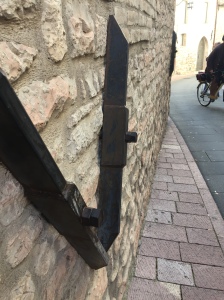 Large weathered steel clamps keep structures from bulging outwards. Everything, it seems, is built of rock into rock.

We are so far above the valley that wispy clouds hang below us, creating an air of mystery. This city was Tolkien’s inspiration for his mythical city of Minas Tirith. It is a city best known for St. Francis and the monastery for Franciscan monks, taking the oath of peace and poverty before heading out to the far reaches of the earth to spread a gospel of peace, hope and love. But it’s history reaches from before his time, as the Roman ruins testify. 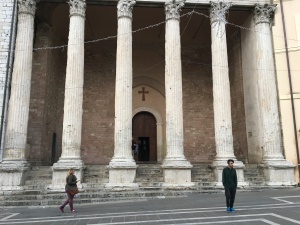 The Basilica of San Francisco has three levels.

The lower level is the crypt, a simple chapel in which lie the remains of St. Francis and several of his closest followers. A monk, in full brown attire common to his order, sits quietly at a desk with his eyes closed. I assume he is praying.

The central level (known as the lower church) is filled with lower than usual arched ceilings, brightly painted.

My oldest son points out the development of religious art frescoes over the span of time it took to complete painting all the walls and ceiling. The progression from flat, no dimensional art where children all looked like miniature adults, to full-figured, anatomically correct paintings in the style of Michelangelo is visualized throughout. Nathan remembered well the lessons taught him while attending classes at Villa Morghen. It was like having my own private tour guide. If only I could remember it all. Alas. No photos allowed, so there goes half my capacity to remember. My husband, however did sneak in a few token reminders before seeing the no photos sign.

The top level (upper church) contains high arched ceilings and a vault that partially collapsed during an earthquake in 1997. Only two years later, its restoration was completed with minimal evidence of the tragedy. The painting behind the altar shows Christ resurrected, amidst angels and saints on high, monks mid-level lowering the ropes of their belts down to the depths of death where some are clinging to the ropes and being raised from the regions below. Others are being grasped and held down by demons of hell. I can imagine someone in times past (and present) sitting through mass with that painting in front of them, and being filled with terror. I rejoice that Christ has conquered death and hell, and gives forgiveness of sins to all who love and follow him.

We wander the city; it lends itself well to wandering whether that be intentional or not. 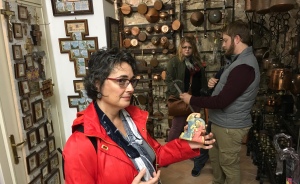 It is a quiet place, no crowds today. From the contents of the shops I assume most that come here come for religious reasons. The shops are filled with Madonnas, saints, and other fine religious art. But if you look along the back walls, you find what my youngest son found most intriguing- swords and crossbows. For all its peaceful atmosphere now, this was a medieval city requiring defense beyond the prayers of monks.

Our suitcase now carries a replica of a short sword, as well as some unique Nativities. 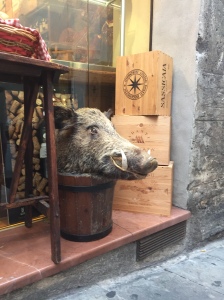 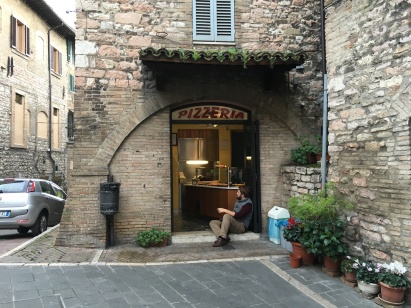 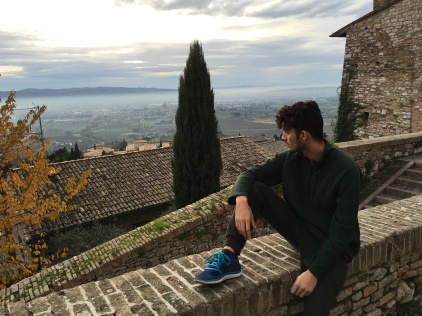 ide of traveling this late in the season is that the sun sets early, and with it many attractions close. We were able to peek through the windows of the museum for the Roman Forum, as well as see the forum’s towering façade and pillars from the outside. We didn’t have enough time to go inside. Maybe, when I retire here in Assisi, I can get to see all of what we missed. Honey, how many places can we retire in?

Highlights of vacations are often tied up with little things. Today, we found a tiny empty chapel off a side road not far from the Basilica and stood together at its center to sing the doxology. The acoustics turned our simple voices into a choir raising our praise to God above. I hope He liked it.

Praise God from whom all blessings flow.

Praise Him all creatures here below.

Praise Him above Ye heavenly hosts.

No turkey dinner for us. We celebrated with the rest of the family (except our daughter who had other obligations like a home business and taking care of our grandchildren, so couldn’t make it) last week. Tonight we toasted each other over delicious Italian cooking with a glass of fine Tuscan wine. We have so much to be thankful for.

Back at the hotel we watch the news. It is the usual depressing blend of politics and Trump-shock. Added to it is now the perplexing news that Lufthansa is cancelling many of their flights, five-thousand pilots refusing to fly. Looks like we are going to have to alter our travel plans yet again.