My husband’s office is running a special on their Facebook page in honor of the upcoming Valentine’s Day. They’ve asked their clients to post the story about how they met their Sweetheart. There will be a random drawing before Valentine’s and a prize. I don’t qualify for the prize, something about a conflict of interest 🙂 . Still, I think to myself–“Oooh! A chance to write!” So, here goes a quick jaunt down Memory Lane!

On Meeting My Man

The first time I noticed my husband, I was standing several people behind him in line waiting for the college cafeteria doors to open. He was lean and tall, with blonde hair that covered his ears, and he was speaking Spanish! 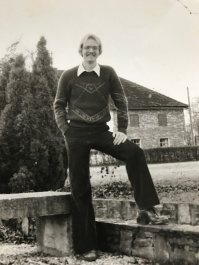 Having grown up in Puerto Rico, someone speaking Spanish in the hills of Tennessee always caught my attention, and my curiosity doubled since Doug was not the stereotypical Spanish speaker. I listened intently, trying to pick up on his accent while not being too obvious of an eaves dropper. I guess I wasn’t very good at it. Doug says that’s when he first noticed me—the dark haired girl several people back in line, staring at him.

It wasn’t love at first sight. We didn’t even talk that day.

The first time I heard about Doug? Same cafeteria. I met my brother for breakfast and he started telling me all about this crazy missionary kid who had flow

n back from South America with a suitcase full of tarantulas to sell at the local pet store. This was well before import regulations like we have now. Well, those hairy arachnoids were none too fond of their new confines, and opted to eat their way out.

They quickly scattered throughout the dorm, traveling through vacant spaces in the walls and along water pipes. If the men in the showers were not awake prior to the tarantulas’ arrivals, they definitely were after.

First meeting. One day as I entered the cafeteria (do you see a theme here?) I looked about for some acquaintance that I could sit with.

At the far back left corner sat an old friend I hadn’t seen for a while. Little did I know, he was Doug’s best friend, Greg. Doug arrived shortly after, and Gregory dutifully introduced us.

Greg complained that he rarely saw his buddy after that. An exaggeration, no doubt, but Doug’s attention was definitely elsewhere 😉 .

First date. That year my roommate and I provided special music for a jail ministry band. Every Saturday night when most of the young men asked a girl to some activity, my roommate and I were at the local prison. It was convenient in many ways. I got asked out by a number of odd fellows I was not interested in dating, and they quickly stopped calling when I told them, “Sorry! I have to go to jail on Saturday.”

The first time Doug asked me out it was for a Friday night, to a movie on campus about the life of Hudson Taylor. I enthusiastically agreed. When I hung up the phone from talking to him, I turned to my roommate with arms raised triumphantly, and exclaimed, “Yes! A good one!”

While not love at first sight, it was pretty close—Maybe love at second sight? He was (and is) the most decent man I had ever met. 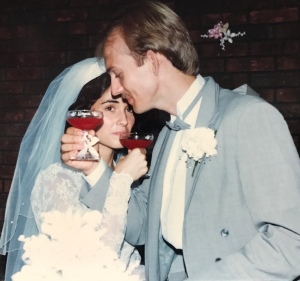 Nine months later, he proposed, nine months after that we married. And so began the crazy adventure of being Mrs. G. Thank God Doug never brought any tarantulas home, but life with my hubby is never boring.

Thirty-three (!) years and four kids later, we are still watching movies and eating together. We made it through those poverty years of college, where it was not uncommon to have to crack the ice on the toilet bowl because our trailer had no heat. We made it through medical school with its stress and demands on Doug’s time. We made it through the years of illness of a child. We made it through the loss of my husband’s faith in God and God’s stepping in and claiming him back. We made it through the tragic loss of a partner at work, and the stress of running a private practice. We have laughed and cried, teased and cuddled, travelled the world (ok, only a way too small portion of it–but we are working on that!) and made a home a delightful place. We raised amazing children. We learned to surrender what we have and who we are to the One who brought us together.

We even have a (dead) tarantula in a frame on one of our bookshelves, courtesy of our niece. (Thank-you, Lina!)

Every day I look at my husband and still say to myself, “Yes! A good one!” I think back to that early love, and yes, it was real and it was exciting. But hey, it doesn’t hold a candle to what we have now!

20 thoughts on “Meeting My Man”