Today we rose early to go to the farmer’s market. Tent after tent and table after table was filled with fresh picked produce, touristy knick knacks, and the scent of fresh baked goods. 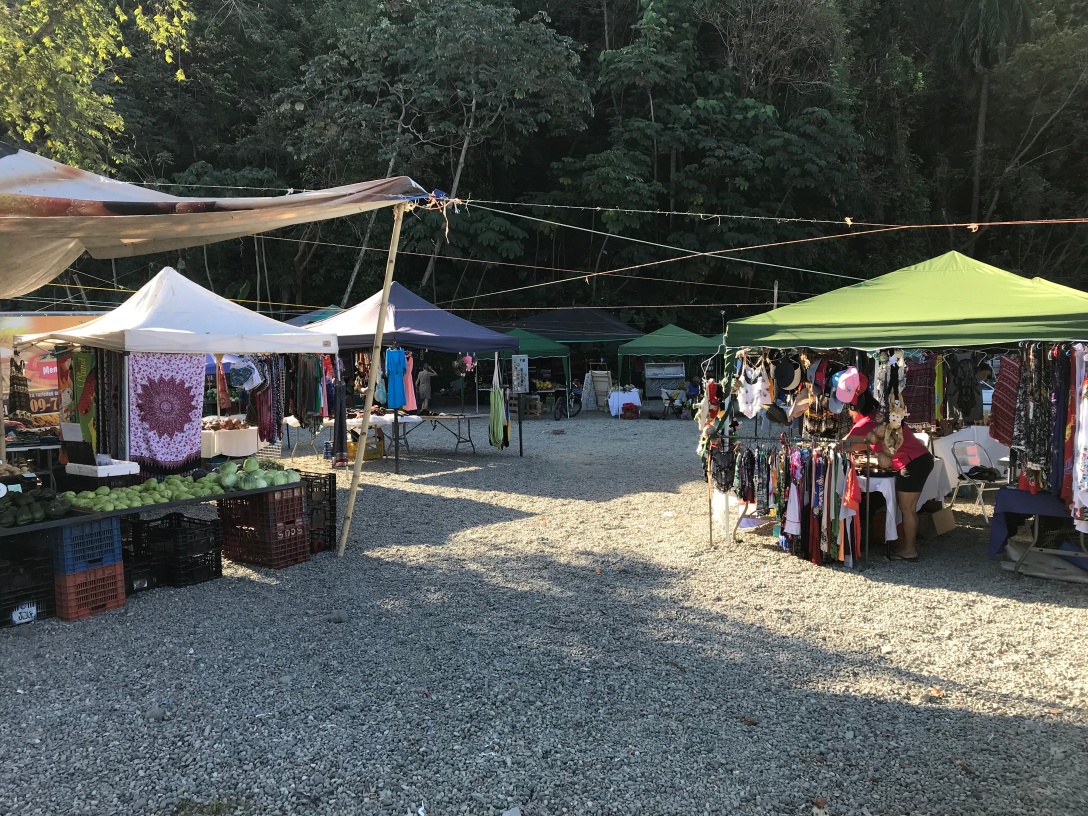 Among the treasures, we found fresh palm heart–a favorite of Doug’s from his childhood, ate mangoes and cheese bread for breakfast, and discovered some cashew fruit. 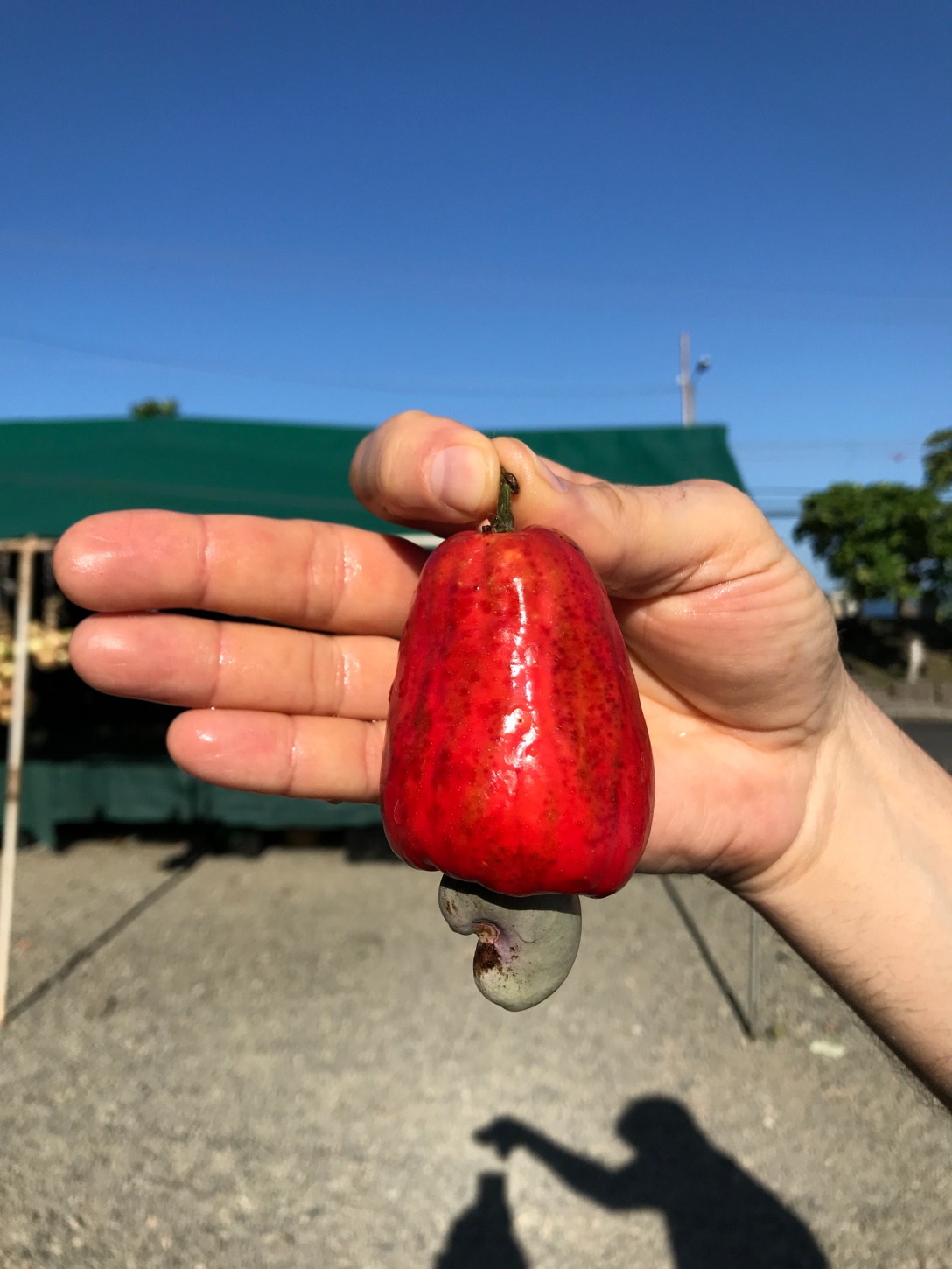 The cashew nut is in that grayish thing at the bottom of the fruit. The fruit itself is a spongy, gooey, odd tasting bit of produce I found barely palatable. My husband, on the other hand, consumed the entire thing.

From here, we made our way to Manuel Antonio State Park. By the time we got through line to purchase entrance tickets, then made it through the security line where all bags are checked for any food or plastics that would endanger the wildlife, the sun was high in the sky and we were almost through our supply of water.

No problem. The sign ahead indicates a trail heading to the base of a beautiful waterfall. We pushed ahead; up a well cared for trail, with steps and walkways going up, up, up, down, up again. Bird calls were abundant, but the crowds were as well, and any bird with any sense stayed well out of sight. Still we climbed, with visions of that wonderful waterfall at the end in which we could cool our feet. 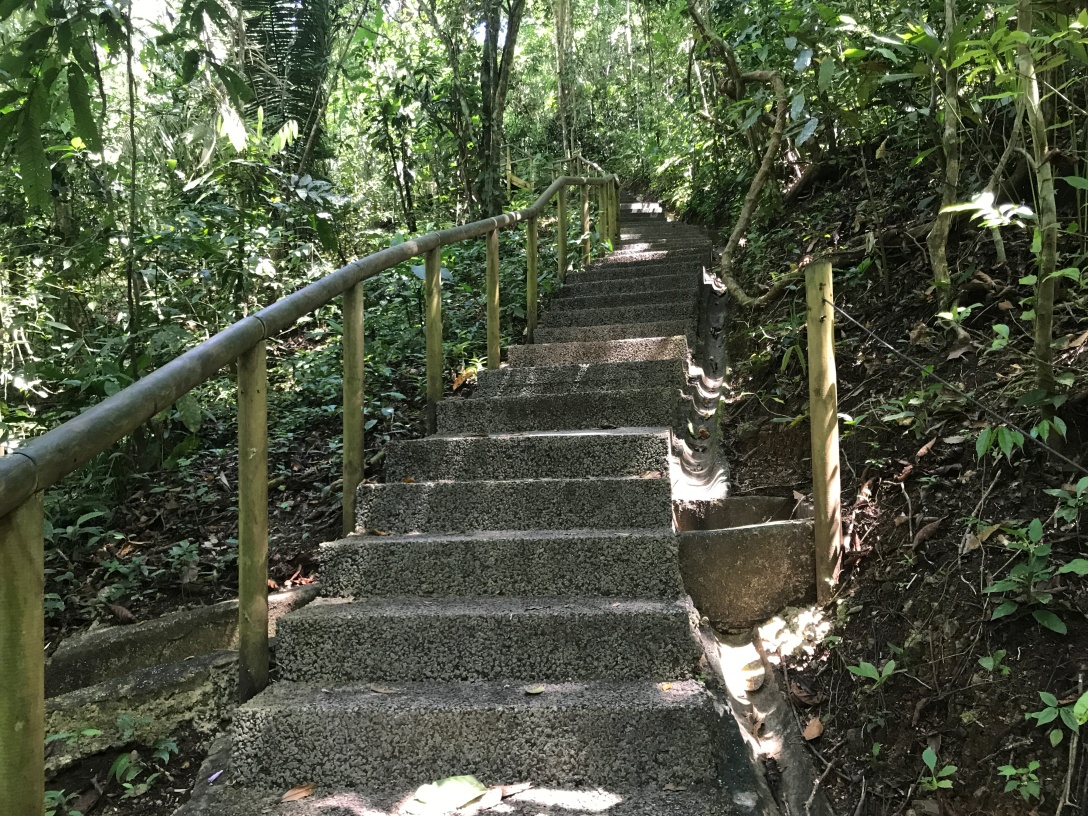 The jungles themselves are alive with beauty. Mammoth trees fight to reach the sun. (zoom in and see what photobombing a tree looks like)

unusual flowers and vines hang alongside the trail. 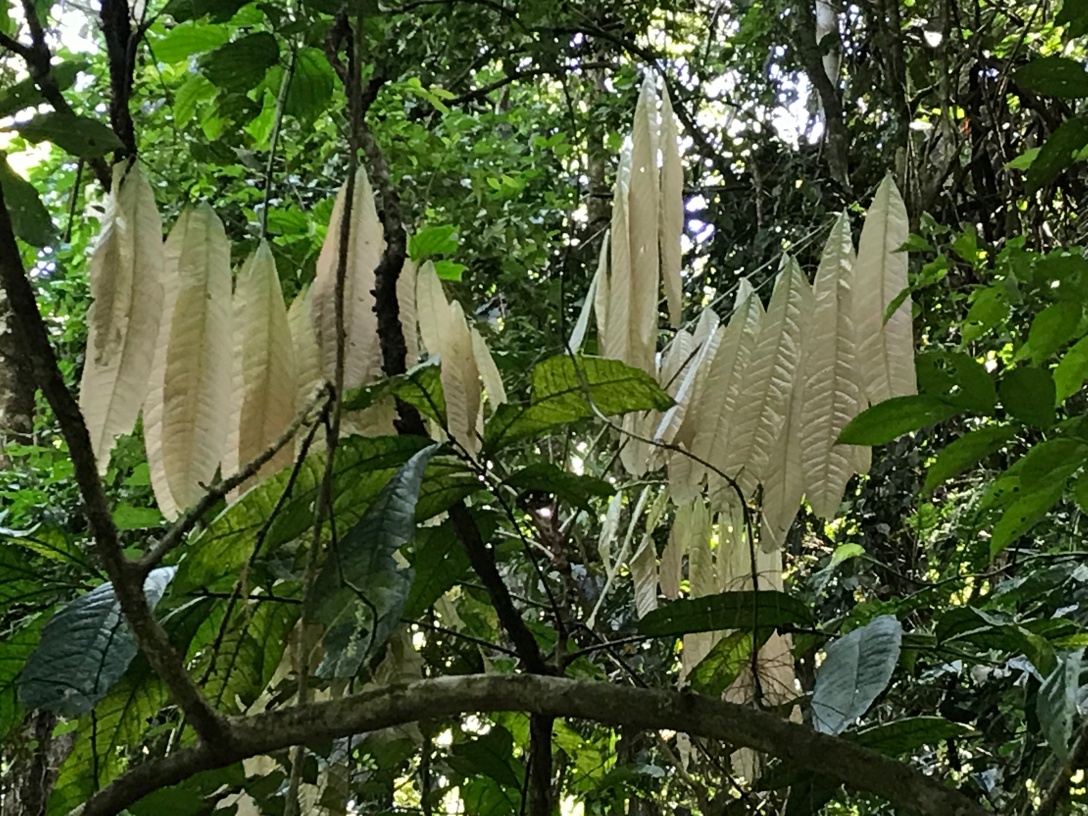 We finally reached the waterfall.

We forgot this is the dry season. Resting on the benches overlooking said waterfall, safely railed away so we couldn’t possibly fall in and drown, we peered down at the trickle that made its way over the rocks. It was so thoroughly anticlimactic I forgot to take a picture.

That’s ok. The walk back made up for it when a family of capuchin monkeys decided to observe the humans as they paraded past. 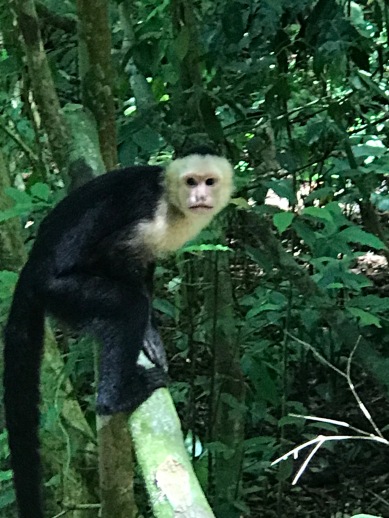 From here, we followed the main trail all the way to the beach. Jungles end mere yards from crystal clear ocean water and between the two is perfect white sand. And people. 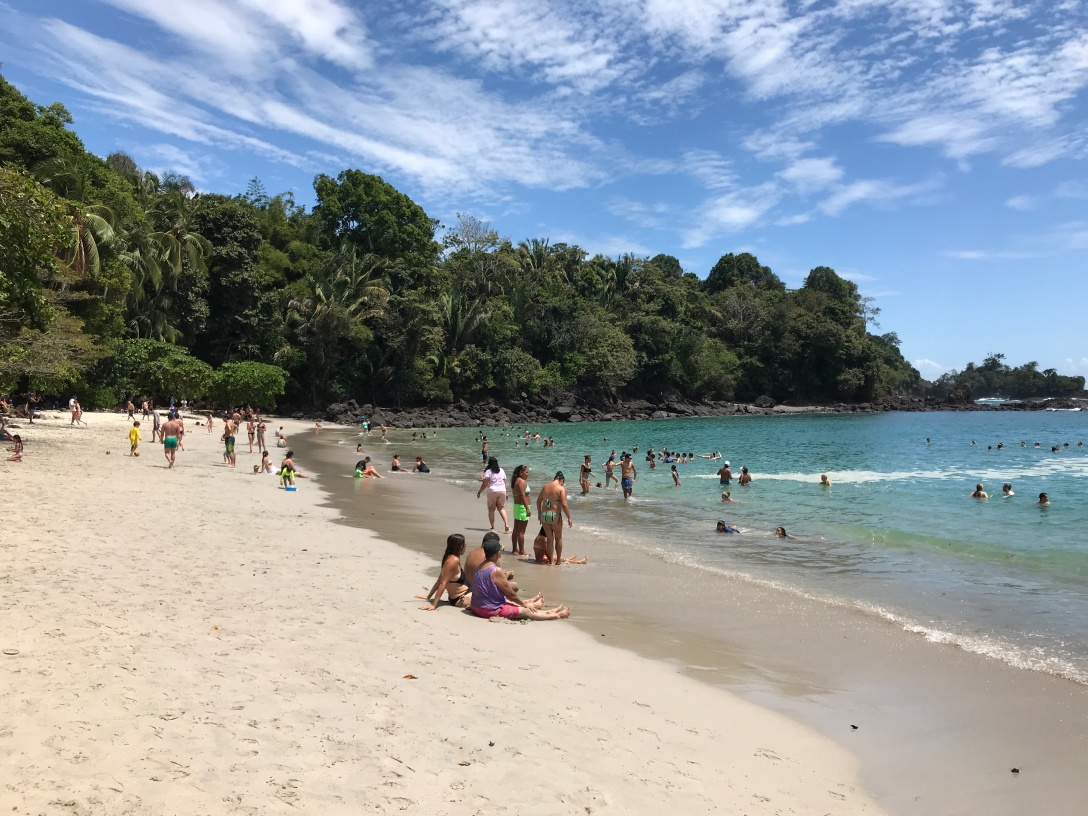 The water is refreshingly cool, especially after the ups and downs of the jungle trail. The bay is a perfect moon shape, with waves breaking on rocks in the distance, and a rocky cove to one side.

Historically, the natives to the area used rocks to form a small enclosed area here. During high tide all sorts of fish and sea creatures would make their way in, and then remain trapped and easy prey when the tide receded. Now, the volcanic rock keeps this part of the beach unused except for a few brave snorkelers seeking sight of tiny fish hiding among the cracks and crevices.

It is truly amazing to sit in the shade of an almond tree with soft sand beneath your towel, waves lapping the shore in front of you, and monkeys playing in the trees behind you. It’s a good idea to keep loose, shiny possessions close at hand.

Making our way back to the park entrance, we were entertained by a sloth, moving with unusual speed from limb to limb. Not that he would win a race, but still, he moved steadily enough. 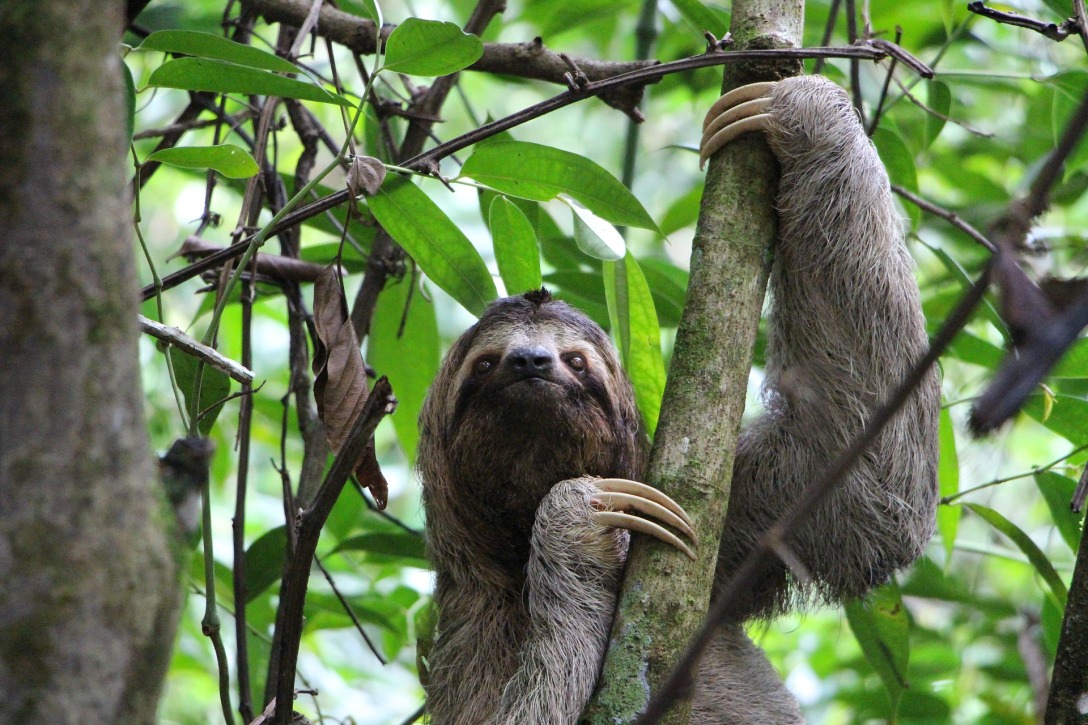 Once back at the hotel, we hurried up and showered, ate a quick supper where the restaurant chefs prepared Doug’s prized palm hearts accompanied by patacones and guacamole–again! Yay!

We then headed back to the beach to watch the sunset. Not far from our hotel is a marina with a nice restaurant overlooking the ocean. We explained to the manager our desire to watch the sunset while enjoying a good drink and desert. As is typical of the Costa Ricans we’ve encountered, they went out of their way to help us. We enjoyed Margaritas and cheesecake while being serenaded by an outstanding guitarist, and  observed our star as it dropped into the sea. 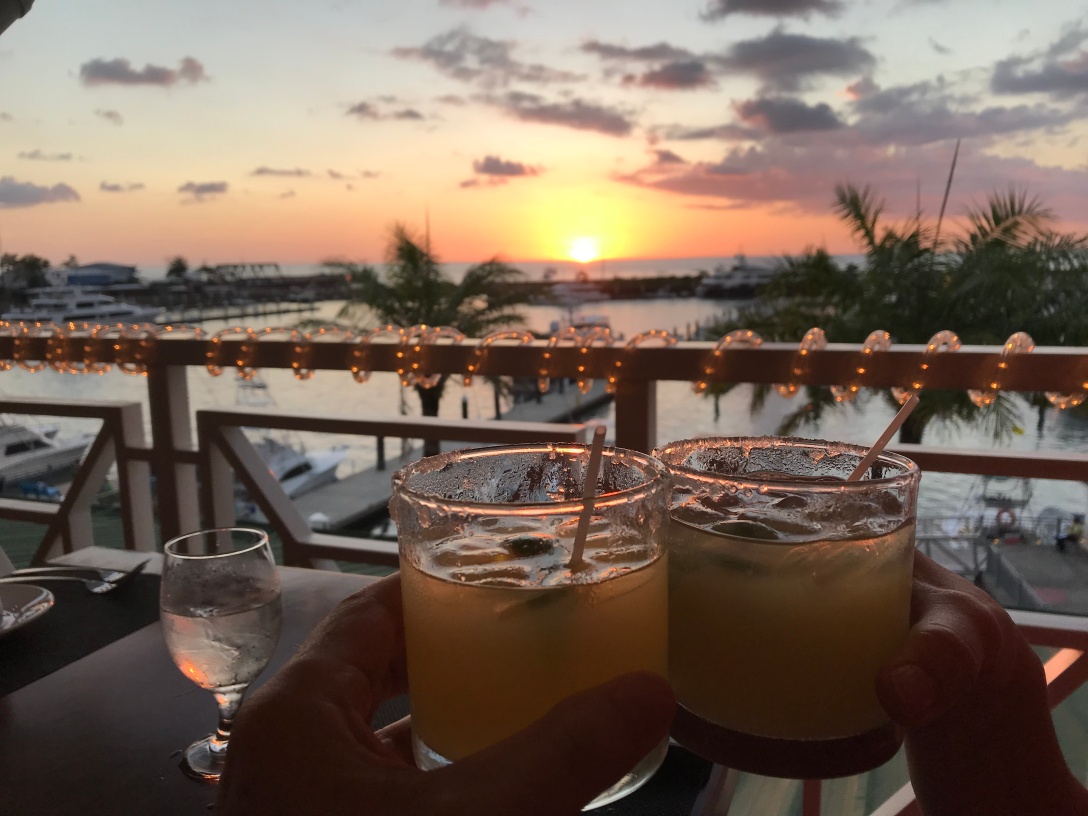 This is truly an amazing country. Our time here has been way too short, but most definitely worth it. Tomorrow is our last full day and we head back to San Jose. We plan our return route to be via a different road, coming around to the north of San Jose and hopefully skip some of the city traffic. I am excited to see what that part of the country looks like.