Recently, our family went whitewater rafting on the New River. The name is an oxymoron, since geologists consider it the oldest river in North America, and it’s considered by some to be almost as old as the Nile River. Tectonic plates heaved upward forming a gorgeous gorge lined by gigantic boulders and sheer rock cliffs; scenery now enhanced by dense forests and irregular terrain.

Birthed in the mountains of North Carolina, the New River weaves through the Appalachian Mountains and reaches its glory in the poverty-stricken region of West Virginia. Here, near the town of Fayetteville, it plunges through the rock-lined gulley in rushes of white water funneling its way between impressive rock formations, followed by smooth, fast-moving flats where people like me can rest their arms while waiting for the next rush.

For our adventure, we chose one of several white-water resorts: ACE River Adventures. Finding a Groupon giving us nearly 50% off highly influenced my choice. My habit of looking for deals paid off well on this trip. Having vacationed with ACE once before, I also knew they have highly trained river guides. Never underestimate the need to have a guide who knows the river and knows how to guide your raft and you. The river could, literally, eat you alive if you didn’t know where to go when.

We arrived at the resort, signed our life away on the dotted lines acknowledging all the ways we could be injured or die. This was followed by donning proper gear: helmets, personal flotation devices, and paddles. Next, we boarded an old bus for the drive to our drop off point. On the drive, which meandered hairpin curves I would have trouble maneuvering in my minivan, the lead guide lectured us on river safety techniques. My two daughters-in-law, both of which weren’t so sure about their mom-in-law’s idea of a great outing, listened with paling faces and pupils wide with apprehension.

“The number one injury on the river is sunburn,” the lecture began. We had plenty of sunscreen. No problem.

“The second most common injury is loss of teeth.”

The grip. Paddles have the little T on the end for a very good reason. If the pressure of water or rocks pushes the blade of the paddle and you are only holding the shaft, the end is shoved upward, striking whatever surface is in its way. If that happens to be your mouth, good-bye teeth. To prevent this, you have to hold fast to the T grip at all times, even when the water appears smooth. 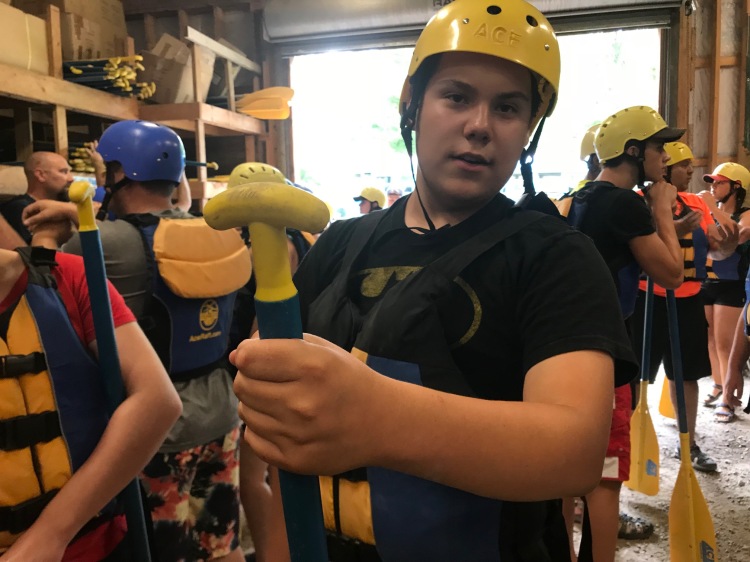 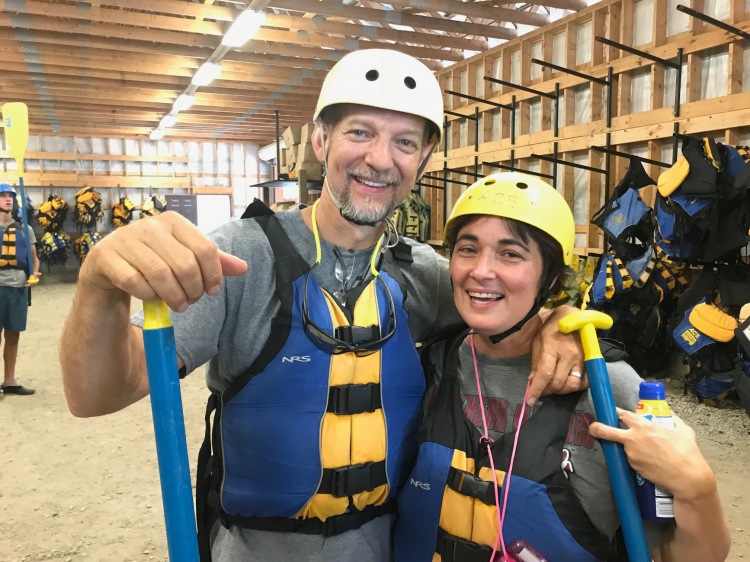 Knee injuries. While rafting, you sit on the inflated sides of the boat. Like beams crossing the center are more inflated tubes, intended to hold the sides out and used to secure items like the small cooler we carried. While you need to push against these tubes with your feet to give support and balance, it’s important not to wedge your foot beneath them. If you are thrown from the raft and your foot is wedged in the boat… Not so good.

The final big warning—foot entrapment. If you fall from the raft, immediately draw your feet up, look to your guide for direction, and swim the way indicated. NEVER try to put your feet down. Rocks big and small line the river bottom and if your foot gets trapped in one, the water pushing behind you will make it near impossible to get out.

By the end of the lecture, everyone on the bus was a bit sober. Having done the river several times before, I understood the warnings, and I also understood that with a good guide and if I followed directions, injury was highly unlikely. Trust your guide. Follow directions.

White-water rafting, my friends, is what I consider the best sport ever invented.

Our group of seven was assigned a raft with Dave Potter as our guide, and we did the river with a group of 4-5 rafts. The head guide led the group, and each raft had a guide of their own. Safety protocol meant everyone traveled together and each boat watched out for the rest. We practiced paddling together following the calls our guide would make on us, learning the various techniques necessary to maneuver downstream.

After a quick lunch, we were on our way.

The place they chose to begin our trip was perfectly chosen. The first few runs included level three rapids, fast enough to be fun, but easy enough to navigate so the nervous in the group gradually realized they could do this. Soon everyone was smiling and hooting and paddling with all our might. From there as the river drops through the gorge and the mountains rise higher on either side, the rapids increase in size until you reach level five, the highest commercially navigable rapids. I’m almost drooling to think of it.

At various spots, some in other boats fell overboard, followed directions and were back in their boats without mishap.

At one spot we paddled around the eddy after doing a run and pulled the nose of our boat into the rush of water coming over the falls. They call this surfing. The boat may be held in place for quite a while if the pull of the water is just right, water pouring over the occupants inside while they holler and paddle furiously, or hold tight to their T’s as necessary. It’s an exhilarating feeling, and also a likely place to get thrown over.

One lady was knocked from her raft. I suspect she had wedged her foot in the boat; I don’t know for sure, but when she came up her face showed both fear and pain. They pulled her into a raft, went to shore and we waited while they evaluated her injury.

Knee injury. Probably not broken, hopefully only sprained, but injured sufficiently to make it unwise for her to make the rest of the trip downstream. With an ace bandage to support her knee, a few guides and rafters had to help the young lady up the rocky ravine. I was very proud of my husband, who, though probably the oldest in the rescue team, was among the fittest and was able to help carry and lift their way up the mountainside, over a mile until they got to the train tracks and help that awaited them. Our folks then had to make their way back down the treacherous terrain to where the rest of us waited, eager to know all went well.

I understand why Air Evac is necessary for worse injuries.

The next six miles were uneventful and full of excitement. It’s like flying and swimming and racing all in one. It’s working as a team and calling encouragements and whoops of delight when you successfully reach the end of a rush. We kept everyone onboard, except for when we wanted to go over for a swim. Our guide showed us where it was safe to jump from a rock and where we could swim through white water safely.

Wildlife: we saw no bear but witnessed a family of otters playing in the shallows. I’m sure there were creatures in those woods watching the crazy humans going where most animals hesitate to go, but our eyes were on the water and we missed them completely.

By the end of the day my cheeks ached from smiling so hard, my shoulders begged for a rest, and my abs and buttocks commiserated. With the famed New River Gorge Bridge arching across the span of the gorge just downstream, we pulled our raft up the bank to the waiting trailer and thanked our guide for leading us well. Our group left, wreathed in smiles and contentment from a day well spent, a job well done, filled with the joy of doing the challenging and conquering it while having a blast. We survived to smile another day! 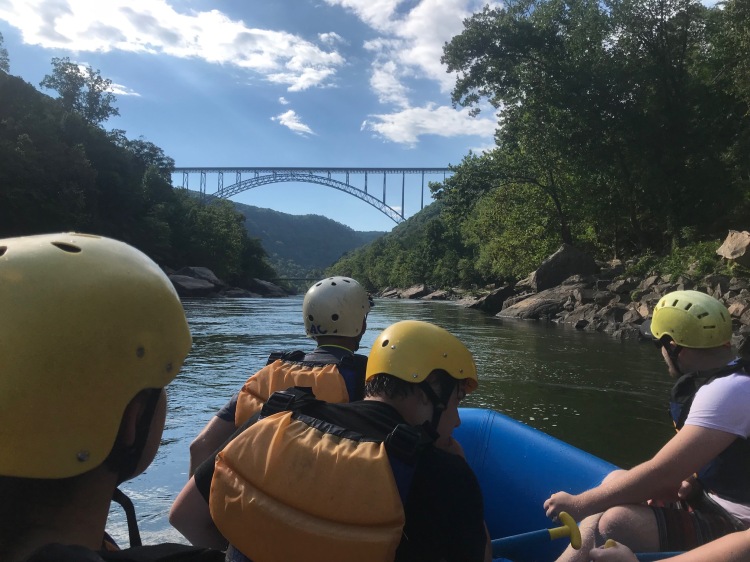